Jack Marley Park in Angier - I LOVE THIS PARK! Totally worth the drive!!! 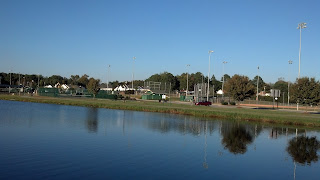 Jack Marley Park is the reason I started this blog! I wanted to find the parks that were beautiful, well-maintained and offer a lot for the little ones to enjoy. Places like Kids Together in Cary, Kids Towne at Kelly Road Park in Apex, Pullen Park in Raleigh and Music Time at Brueggers in Apex are absolute child-rearing treasures in this area, and I believe they should be shared. Jack Marley Park is in this class!

There are two jungle gym areas, swings, a beautiful pond with a water fountain in the center and lots of ducks, a .8 mile walking trail, workout stations, volleyball courts, softball fields and a skate park. Truth is, I didn't get to see it all my kids had so much fun playing and running around. It is clean (except the bathrooms), they let you feed the ducks and one of the playground areas is fenced in to keep the kids off the running trail and out of the pond. 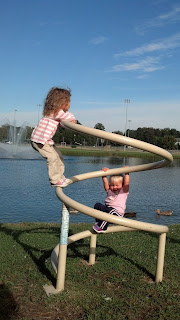 As Pullen Park is my favorite, it is the park I measure all others against. So here is where Jack Marley falls a tiny bit short. Again, the bathrooms were not very clean. There are three sets of bathrooms at this park, which is pretty spread out, and only one set was unlocked while we were there. We could have had an accident, as the potties were at the other side of the park. We didn't, but I think it's good to know ahead of time anyway so FYI. Also, part of the .8 mile trail is right next the street and the parking area - there's not even a curb on part of it so my toddler had to be picked up so she wouldn't run in front of cars. She's a bit of a wild child. But that area is not really close to the playgrounds, so it was just an issue as we were walking from one end of the park to the other. 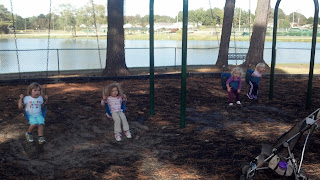 My kids have a short attention span, but they played nonstop for almost two hours. This park is in Angier, and I will not hesitate to make this drive in the future. It's worth the trip!

HIGHLIGHTS: Two playgrounds (one which was fenced in to keep the kids off the running trail and out of the pond), volleyball courts, skate park, gorgeous view of pond with water fountain, ducks, walking trail, tennis courts and more!
LOW LIGHTS: The bathrooms were a little rough and some were not even open, walking trail passes right by the road and water.
COST: Free!