Haunting At Harris - Missed the Hayride, but Still Pretty Fun 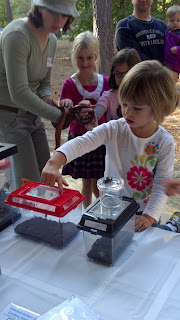 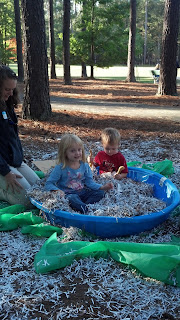 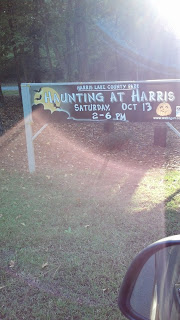 If you didn't get to Harris Lake County Park early on Saturday, you probably didn't get to enjoy the free hayride. The activity started at 2 p.m., and I think we got there at 3:30. The hayride tickets had already sold out!

It was OK for us, because we went to a pumpkin patch earlier in the day (Green Acres in Cary) where there was a hayride, but some kids threw absolute fits when they found out they couldn't go. I suggest you get there early next year.

The bulk of the activities were crafts and learning stations. My 3-year-old and I went, and it was pretty fun. There were several things that were way over her head, but others were perfect for her. Oddly, the preschooler that refused to play the bean bag toss or dig through the sand for treasures, stood next to the snake and spider lady for 20 minutes, asking question after question and man-handling the corn snake. This was not a small snake either. There were also live spiders and a dead wolf spider, which she asked me if she could kiss! UGH! 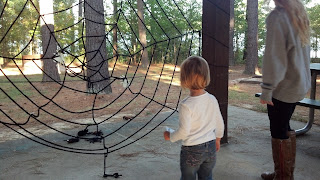 There was an obstacle course, which the little ones loved, and the playground was absolutely packed the entire time we were there. I would say it's geared toward kindergarten and older children, but it was still wonderful, and we will absolutely go back next year.

The hayride had an Indiana Jones theme, "Raiders of the Lost Park," and those who got a ride said it was very cool and true to its theme. The only casual complaint I heard was from a mom who would have liked to know there was a man with a chainsaw in the woods who chased the hayride. Go figure!
For those who missed the hayride, there will be hayrides again at Harris Lake on October 28 at 2 and 3 p.m.

Click here for the Harris Lake calendar of events.

HIGHLIGHTS:If your child didn't like one event/craft, there were dozens more to choose from, the hayride sounded pretty fun, Harris Lake is beautiful and has a nice playground and great dock. Also, they gave away "prizes" which was the biggest hit for my little one.
LOW LIGHTS: The hayride tickets were gone before 3:30, so you have to get there early to participate. Harris Lake is known for ticks. We didn't have any on us when we got home, but you definitely want to check yourself and your children.
COST: Free!

Email ThisBlogThis!Share to TwitterShare to FacebookShare to Pinterest
Labels: Activities, Free, Harris Lake Park, Haunting at Harris, Lake, outside, playground, things to do with kids in Raleigh, volleyball court, where to go with your kids
Location: 2112 County Park Dr, New Hill, NC 27562, USA