Jordan is sick again today. That means I have to get creative tomorrow on her birthday. Nana's in town, should I try something new? Or should I go with an old staple? Maybe we'll make birthday cupcakes.
What do you do with sick kids? Rest. Bummer.

Posted by Unknown at 9:13 PM No comments:

I took the day off and went into work. The kids are with a sitter! WHOOOOO HOOOOOO!

I had adult conversions and (he, he) went to the bathroom by myself. That may be too much information for some but it's a big deal for me.

I even went out to lunch to a new little cafe in Cary, NC called Sugar Buzz. (BTW, the sign outside said Gluten Free Fridays for those with gluten issues) It's not the best place in the world for a dieter to eat lunch, but I was starving. So I got chicken salad on a croissant and stared longingly at the desserts. It was so hard not to eat them, but I was good, as was the chicken salad. It was a quaint, cute little shop with hand-decorated cakes and other desserts. (see above).

Sugar Buzz is located off of Kildaire Farm Road in Cary next to The Meat House. 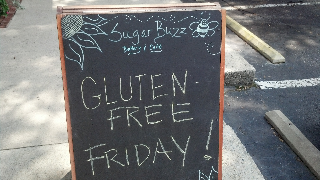 Posted by Unknown at 1:10 PM No comments:

A New Turtle (to us) at Crowder Park in Apex, NC

We didn't get a picture, but I swear we saw a 3-foot turtle at Crowder Park on Thursday! The girls went nuts. They were yelling so loudly it attracted about 15 other kids.

Don't be afraid to do something new or find a new friend. Get out of your comfort zone.

"friends are like chocolate cake, you can never have enough ..."

That's a bad simile for a woman on a diet.

I had a playdate with a book author who lives in my neighborhood today who was giving me self-publishing tips. It was really fun, and she was so nice. Jordan made a new little buddy. They played really well, and both girls were introduced to new toys.


HIGHLIGHTS: New friends, new experiences, new ideas and a change of pace and you can do it anywhere.
LOW LIGHTS: You never know how your kids are going to get along with the new kids. Sharing is sometimes an issue, but that's an every day issue at our house anyway.
COST: Free!
Posted by Unknown at 10:05 PM No comments:

A quick trip to our neighborhood park

We don't have a big car, so if I watch another child for a few hours, we really have to get creative as we cannot go anywhere.

Unfortunately, I don't have a lot of creativity in me when I'm tired and cranky. I am both today. So we played peek-a-boo (total 18 month old favorite) for 30 minutes and went to the neighborhood park for another hour (less than 2 blocks from my house). Other than Jordan poking another little girl in the face, it was fun. OTHER THAN THAT. It pretty much set the tone for the rest of the day.

Think I'll got to be early tonight and find something more fun to do tomorrow! This day has to end soon or I'm gonna lose it.

Posted by Unknown at 9:00 PM No comments: 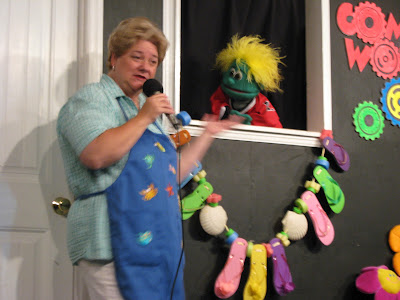 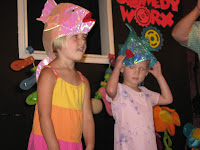 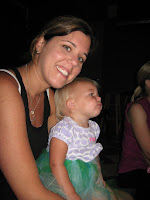 Kazoom is a great little puppet show by Carolina Puppet Theatre in downtown Raleigh at the Comedy Worx location. I really forgot to write this blog about a month ago, and now I am at a loss for what to tell you. Go figure, mommy brain at work again!


Here goes anyway: Bartlet (pictured above) is a cute little puppet that sings, flips his hair back (as he thinks he's a "star") and reads little letters that the kids/spectators bring for him. Jordan loves it! In the middle of the show they bring kids on the stage to help tell a story, usually within a theme for the day. They get to dress up, hold stuffed animals and participate. It's pretty amazing, and well worth the 30-minute plus drive for me to downtown.

They have shows at 10 and 11:10 a.m. The days vary, so you'll need to check out the website. Click here to visit Carolina Puppet Theatre


HIGHLIGHTS: My girls love it. It's stimulating, funny, interactive and educational. Also, it's not far from Mellow Mushroom Pizza which has kid-friendly staff and kid-friendly menu (but that's another blog!) It's also a great indoor activity.
LOW LIGHTS: It's downtown Raleigh. They don't take credit cards. Parking is a MESS, but do-able.
COST: $5 for everyone 12 months and up (parents, too). They don't take credit cards.


My girls are 17 months apart in age. They're hard to keep track of in public and especially at the swimming pool. Midway through the summer I picked up a Stearns Puddle Jumper. So many of the kids had them at the pool and I'd never seen one before.


I found them online, but didn't want to pay $20 each for them. Then I found them at Harris Teeter on sale for $12.50. (In retrospect, I would pay $50 for this life jacket.) I got two and headed straight to the pool. D is a little small for it, but I slipped it on her anyway.

Jordan is a big pool kid. She loves to be there, but she couldn't swim and she was too big for her floaties so they were useless. You should've seen her her first day with the Puddle Jumper. She kicked and paddled all the way across the pool into the deep end. Two visits to the pool later (less than a week) she took it off and went under water - face and all! I told her to kick her legs. She did, and she started to swim. I don't know if it was the Puddle Jumper or the timing, but coincidently Jordan can swim now.

Dani, too, is far more independant with the Puddle Jumper. She kicks and bobs and jumps around in the water and prefers that I don't hold her. I highly recommend this product. On a side note, a friend said she bought a knockoff version of the Puddle Jumper. It wasn't as good, she said, and she ended up buying the Stearns version.


HIGHLIGHTS: Puts your child in a safe vertical or floating horizontal position very easily. My brother teaches little ones how to swim and said getting kids horizontal in the pool is important in teaching children to swim and more urgently get them comfortable in the water.  I don't have to be glued to my kids sides at the pool because they really work!
LOW LIGHTS: It's for kids 30-60 lbs. Dani is about 28 lbs so it's a bit big for her.
COST: I paid $12.50 on sale (they're probably going on sale now as the end of the pool season is approaching) - saw them today on Amazon.com for as low as $15.
Posted by Unknown at 2:03 PM No comments: 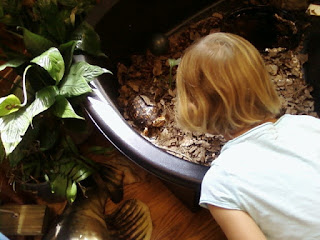 Beat The Heat with the BUG BEAT!

When it's 95 degrees and sweltering hot, we tend to do the same things over and over. By August it can get very boring! I am not the craft person some of my mommy friends are. I just didn't get "that" gene. Gimme a ball and bat, a swing set, jungle gym, swimming pool -- ANYTHING -- but don't coop me up inside!

However, there are a few things I do LOVE to do with my girls (18 months & almost 3) when we just can't deal with the weather anymore. My favorite is the dance parties! For a baby shower gift my mom gave me a book Do Bugs Have Belly Buttons? by Christine Tortorella. It's a CD book. No, it's not just an audio book but a CD with the front cover as the page-turning book. It's adorable.

My girls absolutely love the music, specifically the song "Bug Beat." It's impossible to describe, so I'll just show you (video above).  -- She also offers free downloads of her song on her website dobugshavebellybuttons.com!

I recently learned the author, wife of New York Rangers coach John Tortorella, gives all proceeds from the sale of her books to literacy programs. Love that.


HIGHLIGHTS: It's a great way to get your kids on your feet when it's too hot to run around outside.
LOW LIGHTS: Sometimes they make me listen to it 100 times.
COST: FREE or for book $10 + $1.95 shipping
Posted by Unknown at 2:32 PM No comments: